Earth-based radar observations provide an extremely powerful tool to characterize the physical properties and dynamics of near-Earth asteroids (click here for examples). This characterization is essential in four contexts:

A well-conceived spacecraft mission to asteroids will certainly be preceded by ground-based radar reconnaissance of the target body, which often produces a series of radar images at ~10 m resolution. With a sequence of such images, three-dimensional shape models can be produced. The radar data provide precise estimates of the size, spin, shape, reflectivity, and wavelength-scale roughness of the asteroid. For binary systems, which are common in the near-Earth population, knowledge of the asteroid mass and density is also accessible.

The field of Asteroid Radar Astronomy started with the detection of near-Earth asteroid (1566) Icarus on June 13-15, 1968 at Haystack (Pettengill et al 1969) and June 14-16 at Goldstone (Goldstein 1968). The first asteroid detection at Arecibo was that of (433) Eros in 1975 (Campbell, Pettengill, Shapiro 1976), which was also detected at Goldstone (Jurgens and Goldstein 1976). The first detection of a main belt asteroid, (1) Ceres, took place at Arecibo in 1977 (Ostro et al 1979). The detection rate of asteroids remained modest (<10/year) until the upgrade of the Arecibo radar in the late 1990s. Since then, dozens of asteroids have been detected each year, especially since an increase in NASA funding around 2012. Steven J. Ostro (1946-2008) devoted most of his career to asteroid radar astronomy. 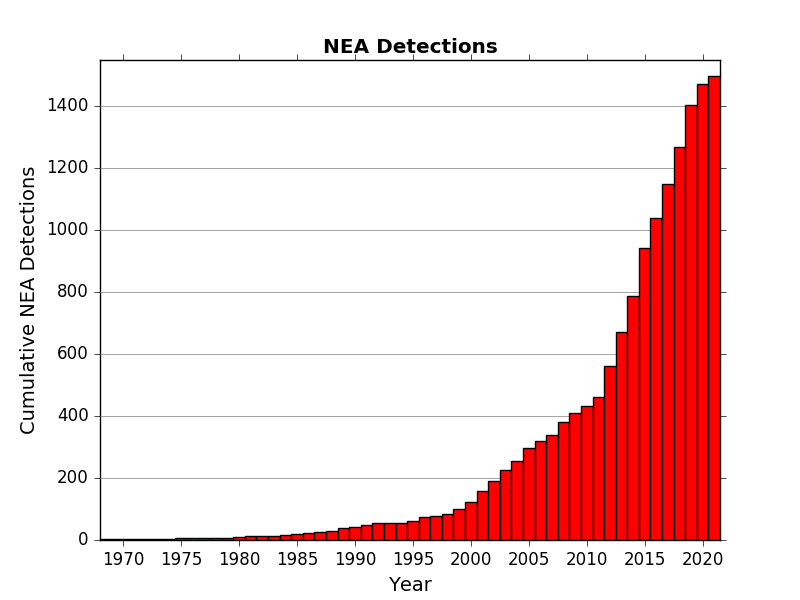 Cumulative number of Near-Earth Asteroid Radar Detections as a function of time. Each radar detection is counted separately. 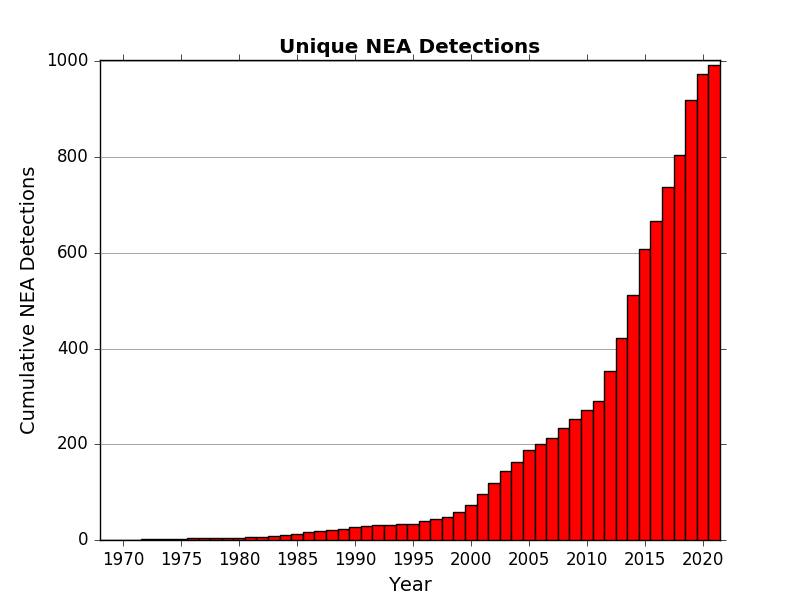 Cumulative number of Near-Earth Asteroid Radar Detections as a function of time. Asteroids that have been observed on more than one occasion are counted only once.

Here is a list of radar detections of asteroids, which includes hyperlinks to a page of radar-observed properties for each object as well as further links to the available radar data, where available.

The Arecibo radar can detect a substantial fraction of the near-Earth asteroid population. The figure below shows the expected performance at a declination of 18 degrees, which maximizes track duration. Numbers will be slightly lower at other declinations due to shorter track times and gain reduction. For Goldstone, divide the numbers by 20. 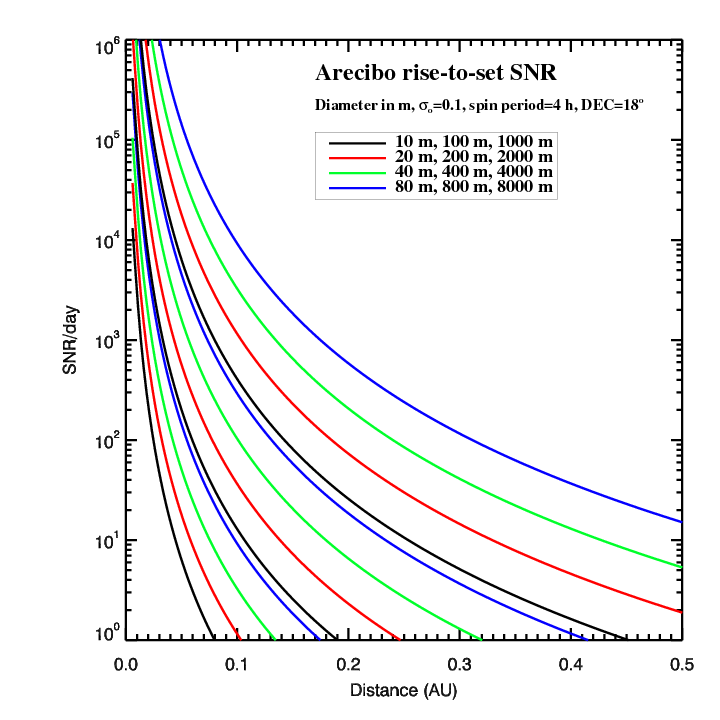 If you are interested in learning more about the impact of asteroid radar astronomy, here is a Top 10 list of Near-Earth Asteroid Radar publications, by citations (Citation count is from Google Scholar, June 7, 2020).

Other tools and materials are available at radarastronomy.org.